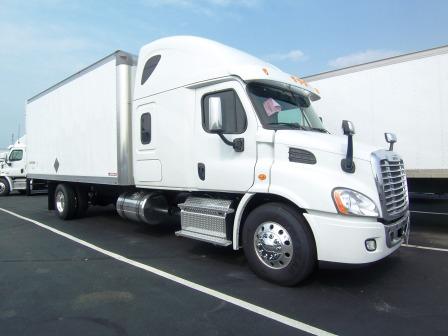 Although he graduated from Ohio University, Joey Haji is a Michigan man, through and through. He is an automotive enthusiast, he pulls for the Wolverines on Saturday afternoons, and he bleeds maize & blue. But Haji also has learned how to grow a fleet in the expedite industry, fast.

In 2009, after not much experience in trucking, Haji became intrigued by the opportunity and thrill of truck ownership. He saw a lucrative market where he could be his own boss. Less than two years later, Haji purchased his first tractor in March of 2011. The very next month he began officially running the truck. Haji was immediately hooked. However, he was not finished or satisfied. Truck ownership was working well for him and the next step was fleet ownership.

Along his journey, Haji was introduced to Bobby Snyder at Fyda Freightliner in Columbus, OH. Snyder came highly recommended to Haji by a top-name carrier with which he was doing business. “Since that point in 2011, I have purchased and traded in many many trucks (from Fyda Freightliner) quite often,” Haji raved. “I don’t have enough good things to say about my experience with Bobby and Fyda.”

In less than five years, Haji’s fleet has grown at an impressive rate. When asked about the size and state of his fleet, Haji smiled and responded, “We currently have 20 trucks in our fleet and we are proud to say our oldest one is a 2013.” April of 2016 will be five years since his initiation into this industry, and this man is growing at a rate of over six trucks a year. Haji knows this is an impressive feat.

When asked what type of impact Bobby Snyder and Fyda Freightliner have had on his business, Haji stated, “If you are shopping somewhere else for trucks or equipment and think you are getting a good deal, just call Bobby, and his team can do better. I know we are getting the best deal in town, and the customer service on the sales and finance end is superb.” When discussing his overall experience, he responded, “It is easy, relaxing, stress free and I feel as if an older brother is taking care of my purchase deal.”

Lastly, we asked Haji if he would recommend Bobby Snyder and Fyda Freightliner to others, Haji immediately replied, “Absolutely. I have already referred 3 different friends and other truck owners to Bobby and Fyda. They all are just as happy as I am and pleased with the services provided by Bobby and his team.”