Should I Stay or Should I Go? Knowing When to Find Another Carrier 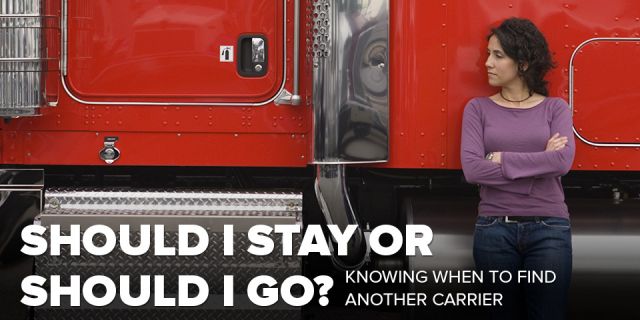 Today, the market landscape has changed, with numerous carriers vying for a bigger slice of the expedited trucking pie. And while the increase in competition has driven down pay rates over the years, it has also created more options for owner-operators and fleet owners, who may not be happy with their current carrier.

“The pay was phenomenal. It was nothing to get $3.00 or $4.00 a mile on a load. But, you know, competition has a way of changing the dynamics of that,” Corfman recalls.

At the time, Roberts Express was the pioneer and main player in expediting, with few competitors. Today, the market landscape has changed, with numerous carriers vying for a bigger slice of the expedited trucking pie. And while the increase in competition has driven down pay rates over the years, it has also created more options for owner-operators and fleet owners, who may not be happy with their current carrier.

Corfman knows from experience, having switched carriers a handful of times during his three decades in expediting. And today, he’s a fleet owner with six trucks leased to Panther Premium Logistics and one with V3 Transportation.

So, what are the signs that you should leave your carrier? ExpeditersOnline.com spoke with Corfman to get his advice on the red flags to look for.

Sitting Too Long?
The most glaring red flag, says Corfman, is that you’re having to wait too long between loads.

“If they’re not providing sufficient loads for you to support your business, then you need to move on,” says Corfman.

He’s speaking from experience. When he was with Tri-State, General Motors was its biggest customer. But in the early 2000’s, the business from GM dried up — and so did Corfman’s loads.

“When the business from GM disintegrated, that put Tri-State in a marketplace that they just weren’t, at that time, ready to compete in,” says Corfman. “I was thinking, ‘Well okay, they’re going to go through a bunch of growing pains right now because they just lost their biggest account. How long is that going take them to recoup that business?'”

Corfman didn’t wait to find out. He signed on to Panther, where he still leases to today. The lesson: Whether you’re about to lease to a carrier or have been with one for years, always keep tabs on the carrier’s customer base.

What exactly do you look for to discern whether the carrier can support your business?

“Do they have their own customer base or are they bidding everything?” says Corfman.

In the first part of the question, Corfman is referring to the carrier’s long-term shipping contracts with customers that help ensure there are still loads, even when the overall freight market is slow. “With those contracts, you’re insulated a little bit more from recessionary periods,” says Corfman. “That’s why you have to be with a carrier that does those kinds of loads.”

The second part of the question points to a carrier’s over reliance on “load boards” for freight, which is a huge red flag.

Load boards are online matching systems where shippers and brokers post their freight needs, and carriers bid for those loads, with the award often going to the lowest bidder. And that means you’re getting fewer, less profitable loads.

Greener Grass?
But Corfman also cautions that, in a slow freight market, your carrier may not be the only one experiencing fewer loads.

“The grass isn’t always greener because you have to remember that all the carriers are fighting over the same freight,” says Corfman.

But how do you determine whether a slowdown in loads is due to the overall freight market (and not a reason to change) or the carrier’s poor sales performance (which is a huge red flag)?

“Know how they obtain their loads,” Corfman advises. “What’s their load ratio of business from their own customers vs. bidding on load boards? How big of a sales department do they have? The carriers that have big sales forces, where they get their own customers, are the ones who can endure those slower times better compared to the guy that’s bidding on loads. Because when everything is slow, he’s bidding against everybody.”

Corfman also recommends that owner-operators and fleet owners should network with peers and industry experts to get a pulse on the market — and the performance of their carrier.

“I would say network with drivers on ExpeditersOnline.com, Facebook, and other sources,” says Corfman. “Find out what you can and as much as you can and what other trucking companies are doing. Then verify what you’re hearing. See how many times you get that same story. What kind of rate are they running at? A lot of times you find out who’s buying new trucks, and who’s turning them quickly. What are the fleet owners doing? This is useful because fleet owners often have more access [than owner-operators] to certain industry information.”

Sometimes you can gather valuable information through attentive observation. “When you’re at a truckstop, notice whose trucks are sitting there forever and who’s actually moving around,” says Corfman. “You start to put things together like a puzzle. So, it’s not one single sign, but it’s an accumulation of things that you would look at to give you a clearer picture as to whether you should make the switch.”

New Ownership or Management
When you first signed on with your carrier, it might have been the ideal fit for your business. But then the company got acquired or new management took over. Is it still right for you? Or should you make a change?

The answer depends on whether new ownership or management has led to changes that impact your business.

That’s what happened to Corfman after FedEx acquired Roberts Express in the 1990’s. At the time, he was operating three trucks for Roberts Express that were painted red. But FedEx required the trucks to be white. “They wanted us to paint the trucks at my cost, of course. And that just didn’t make sense to put out a bunch of money to paint trucks just to accommodate this company. That’s when I made the move to Tri-State,” says Corfman.

The lesson: Even if you’re happy with your carrier today, things change. Continuously evaluate whether the company still fits your business objectives.

The Bottom Line
When it comes to whether you stay with a carrier or leave, at stake is the long-term viability of your business. As Corfman puts it: “[The carrier] has got to have a steady stream of revenue. Whether you’re running newer equipment or you have older equipment with higher maintenance costs, the carrier needs to have enough business to support your business. And if they don’t, you’ve got to start looking.”