On Your Radar: Upcoming Regulations That Impact Expediters 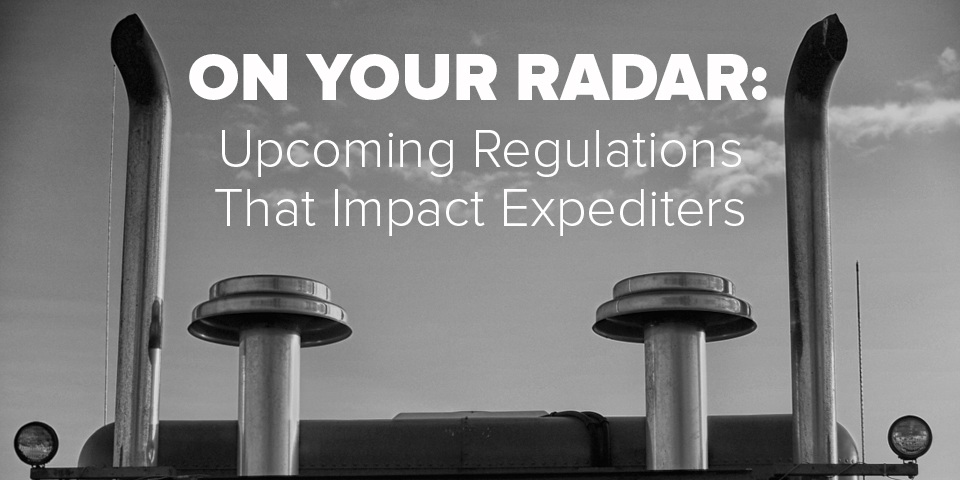 But as an expedite owner-operator or fleet owner, why should you care? How will these announcements impact your business?

Expedite NOW has combed through the government’s press releases and hundreds of pages within the rulings and reports to pull together the most relevant highlights for you.

Imagine — you’re driving at highway cruising speed when traffic directly in front of your truck comes to a sudden halt. But as you act to evade those vehicles, the weight in the freight box causes the entire truck to whipsaw and tip over. You avoided an initial collision, but now your truck is careening out of control, on its side, putting your own life and that of the other drivers around you in danger.

The National Highway Traffic Safety Administration (NHTSA) believes that there is technology available that could save your life by preventing these types of accidents. And that’s why NHTSA has mandated electronic stability control (ESC) systems for all heavy trucks (exceeding 26,000 lbs gross vehicle weight) beginning in 2017.

NHTSA estimates that ESC will reduce the number of untripped, rollover crashes (not caused by striking an obstacle or leaving the road) by up to 56 percent, preventing as many as 1,759 crashes, 649 injuries and 49 fatalities each year.

In the ruling, NHTSA describes ESC functionality in these terms: “There have been two types of stability control systems developed for heavy vehicles. A roll stability control (RSC) system is designed to prevent rollover by decelerating the vehicle using braking and engine torque control. The other type of stability control system is ESC, which includes all of the functions of an RSC system plus the ability to mitigate severe oversteer or understeer conditions by automatically applying brake force at selected wheel-ends to help maintain directional control of a vehicle.”

In other words, the ESC senses when the vehicle is beginning to lose its balance and automatically reduces overall truck speed through engine control and directs braking power to the appropriate wheels in a way that enables the truck to regain control.

NHTSA estimates that the average ESC system cost for heavy trucks to be $585.

In 2011, the Environmental Protection Agency (EPA) and NHTSA announced the first-ever fuel efficiency and greenhouse gas emission standards for medium- and heavy-duty trucks. The program was to be phased in over a four-year period, from model years 2014 to 2018.

This program is commonly referred to in the industry as “Phase 1 GHG Emissions,” which requires heavy-duty trucks, like what are used in expediter straight truck and tractor-trailer applications, to achieve up to 20 percent reduction in fuel consumption and greenhouse gas emissions by model year 2018, saving up to 4 gallons of fuel for every 100 miles traveled.

The program put the onus on truck manufacturers to use existing “off-the-shelf” technologies in ways that achieve the target fuel economy improvements.

But now, fast-forward to June 2015. We’re about halfway through Phase 1, and the EPA and NHTSA have already constructed and announced a proposed ruling for Phase 2 GHG Emissions, with a final ruling expected some time in 2016.

Phase 2 is intended to build upon the previous standards and cover more than just the truck specification by including rules for trailers, as well. And the agencies estimate that under the proposed standards, fuel economy for tractor-trailers alone will improve by up to 24 percent, from the Phase 1 standard.

Well, 2027 is the expected full phase-in of the rule. So, yes, that’s a long way out. But what’s more imminent are the new standards on trailers, which go into effect in less than three years from now.

Why are EPA and NHTSA proposing to regulate trailers? Here is how the agencies describe it in their joint Fact Sheet: “EPA and DOT each have statutory responsibilities to control heavy-duty vehicle pollutant emissions and fuel consumption. Trailers pulled by combination tractors are part of that vehicle. Trailers contribute significantly to carbon pollution emissions, and to the vehicle’s fuel consumption. Cost-effective technologies, including aerodynamic devices, low rolling resistance tires, and automatic tire inflation systems can offer significant CO2 emissions and fuel use reductions for the vehicle, providing a benefit to the environment and the nation’s energy security, and reducing fuel costs.”

The agencies contend that any cost increase to trucks and trailers because of the new
technologies can be recouped by truck owners in less than two years from the projected fuel savings.

Remember, this is only a proposed ruling. A lot can change over the next year before it’s finalized. Continue to watch for developments.

According to NHTSA, rear-end crashes kill about 1,700 people every year and injure half a million more. And the agency contends that more than 80 percent of these deaths and injuries might have been avoided, if all vehicles (including heavy-duty commercial trucks) were equipped with crash avoidance systems (CAS).

In June, the National Transportation Safety Board released its report, “The Use of Forward Collision Avoidance Systems to Prevent and Mitigate Rear-End Crashes,” presenting the case that currently available collision avoidance systems (CAS) is ready for widespread adoption and should become standard on all new passenger and commercial vehicles.

How does CAS work?

The NTSB report provides this description: “A complete forward CAS works by monitoring the environment—either via lidar (light detection and ranging), radar, camera, or a fusion of different technologies—for potential conflicts, such as a slow moving or stopped vehicle. Then, when it detects a conflict, it begins the process of alerting the driver by initially preparing the brakes in anticipation of braking and alerting a driver through different warning cues. If the conflict persists, the system initiates AEB or provides additional braking force if the driver brakes too late or not strongly enough.”

The NTSB points out that the common argument against CAS is cost, and that’s why only 4 out of 684 passenger vehicle models in 2014 included a complete forward collision avoidance system as a standard feature. The issue, the agency says, is that these systems are offered as options, often bundled with other non-safety features, making the overall package more expensive.

The NTSB’s recommendation is just that, a recommendation and not a ruling. There is no timetable as to if or when CAS will become a requirement. But the safety benefits might be compelling enough for expediters to, at least, consider installing CAS on their next truck.