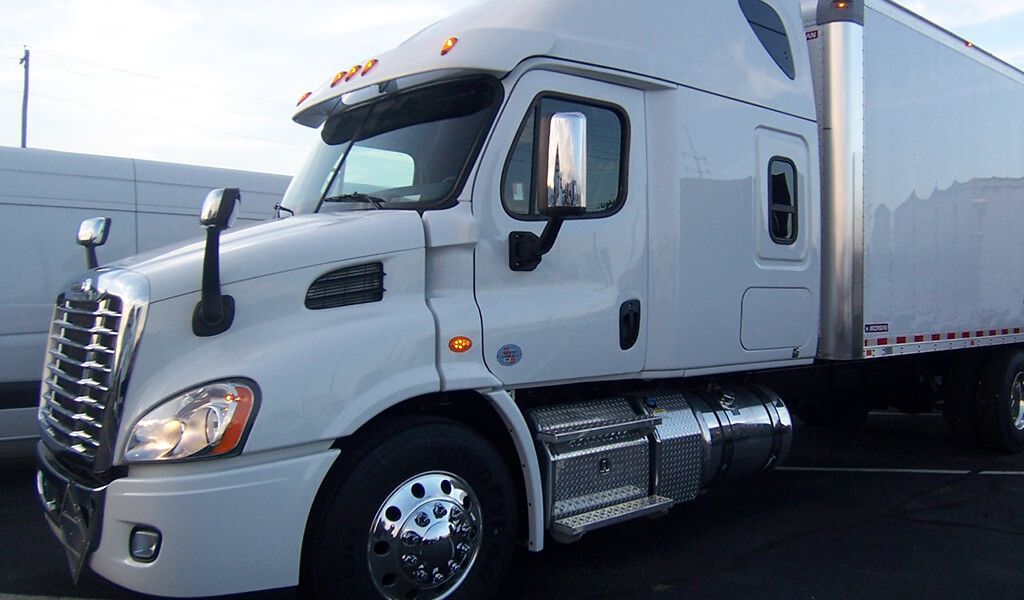 You’re looking to purchase an expedite straight truck that will strike the right balance between your lifestyle needs, business objectives, and budget.

But making a sizeable five-or six-figure investment in a truck can give you heartburn if you don’t know what to look for.

So, what should you consider when purchasing an expedite straight truck?

#1. What carrier are you leasing on to?
Make sure that the truck you purchase will work for whoever you’re hauling for.

“When people come to come and say they want to buy a truck, my first question is: Who are you going to go to work for? Is it Landstar? Is it Try Hours? Is it FedEx? Is it Panther? Because although each of these companies uses expediter trucks, they also have certain small requirements—lift gates, lift axles, size of van bodies,” says Lalonde. “So, decide who you’re going to go to work for and then build your truck around that.”

#2. New or used?
Which is better for a new owner-operator—a new or used truck?

That depends, says Lalonde. “Are you familiar with the expedite business and how it operates?”

How does that impact the decision?

“I think that if you’re unsure about some of those things, I would probably recommend a used truck. This way, there’s less of a financial impact if you decide that [expediting] is not for you in 6 to 12 months,” says Lalonde.

Then you have to consider your buying power.

This refers to whether you can get financing for a new truck or if you can only get financed for a used one. “Buying power is determined by your credit, your down payment, and your time and history in the business,” says Lalonde.

“About 9 out of 10 engines that you’re going to see in any expediter truck today is a Detroit DD13 with a B50 life of 1.25 million,” says Lalonde. “So, you can buy one of those trucks used with 500,000 miles on it and still have a good bit of life left on that truck before you’re going to need major work on it.”

#4. Liftgates
Do you need a liftgate?

Some carriers require it; others don’t.

But even with carriers that don’t, having a liftgate can help increase your load opportunities—and income potential.

“With some companies, if you have a lift gate on, you get paid an extra five cents a mile just to have the gate on every mile. And that’s not just for the miles that need a gate. Even if you use that liftgate only three times a year, you’re still getting paid a nickel a mile every mile because you have the gate. So [the liftgate] is going to pay for itself. And then some,” says Lalonde.

Any advice on what to consider in a liftgate?

“Overall, you have two types of gates for the expedite market,” says Lalonde. “There’s the Plain Jane steel liftgate that’s less money, but it also provides lower lifting capacities—about 2,500 pounds. And then you have the upgraded aluminum gate, which is a bigger platform with higher load capacity.”

The critical factor to consider is safety, says Lalonde. “Keep in mind that you’re up on that [liftgate] platform with a pallet Jack with anywhere from 2,000 to 4,000 pounds on your palette. The standard liftgate doesn’t have a few safety features like cart stops, which pop up at the end of that liftgate to stop the freight from rolling off. Then there’s the self-leveling option. So if you’re parked on an incline, the gate will remain level as it rises, instead of at an angle that could cause your freight to fall off.”

Lalonde says that he has spoken with customers who have shared horror stories about liftgate incidents.

“They’ll tell me about how ‘I fell off, or I’ve known someone that’s fallen off or my buddy fell off and broke his leg.’ It’s not just about damaging freight. You can get hurt on that thing.”

“Most people go with the aluminum, self-leveling, large-platform liftgate. It’s a little more money, but it makes for a much safer truck.”

#5. Auxiliary Power Unit (APU).
An APU provides power to your heating and cooling system and other amenities for your truck without having to idle your main engine.

“Most expediter trucks and nearly every tractor we sell anymore have an APU on it,” says Lalonde. “That’s because of the anti-idling laws, but more and more, the new diesel engines just don’t like being idled.”

Besides capacity, what’s the most significant factor to consider when selecting an APU?

“Serviceability—you know, can you get it fixed? Are there locations to get it serviced?” says Lalonde.

This is important because most truck dealers don’t service the APU. You have to take it to an authorized service center that represents the APU manufacturer.

So, make sure the APU company has a large enough service network to make it more convenient and less expensive to get the unit repaired.

The Bottom Line
Use this five-point checklist as a starting point to get yourself familiar with key factors to consider when purchasing a truck. But then reach out to dealers with experience in spec’ing and selling expedite straight trucks. This will give you greater peace of mind that you’re picking the best truck for your business.

For used trucks, in addition to the dealers above, you can also consult these resources:
ExpeditersOnline.com listings
Expediter Services Truck Sales