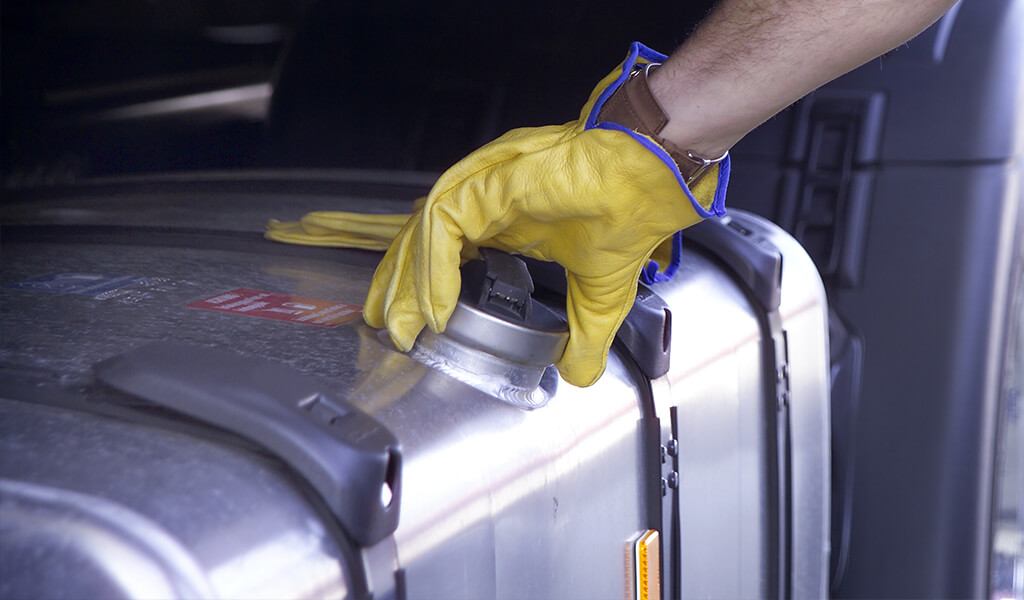 In recent weeks, with the devastating aftermaths of Hurricanes Harvey in Texas and Irma in Florida, the national average price for diesel has jumped from $2.52 before Harvey to $2.72 a few days after Irma, a span of about three weeks, according to AAA’s fuel price guide as of press time.

This may only be a short-term spike in fuel prices, and it’s definitely a far cry from the over $4.00 per gallon for diesel about five years ago.

Back then, veteran expedite owner-operators Bob and Linda Caffee spent over $70,000 on fuel in a year–about $40,000 more than what they expect to spend this year, even with the recent price bump. You can imagine the impact such a big difference on fuel cost alone can make on an expediter’s bottom line.

But although today’s fuel prices are still a good bit lower than a few years ago, the Caffees haven’t forgotten the lessons they learned for maximizing fuel economy during those $4.00-per-gallon days. And they credit these three best practices for helping them continue to keep their fuel costs under control–and put more of that money in their own pockets–no matter what the price of fuel might be.

Best Practice #1. Take advantage of your carrier’s fuel discount program.
“When you look at the fact that you can get anywhere from about 25 cents to up to 60 cents off the cash price per gallon, that’s a recruiting bonus [for the carrier] because that savings goes right into your own pocket,” says Linda.

But how do you price shop with those carrier discounts? Is there an app that tells you who’s providing what and for how much?

“With our carrier, Landstar, we use Comdata cards. And they have an app called the FleetAdvance,” says Bob. “The app will bring up a map and highlight the best price of fuel in your area. And if you’re looking for fuel on down the road, you can also scroll the map to get to the next city, or you can search by city. Then, if you want to, you can zoom out and tap on those prices to find out where that fuel station is.”

But keep in mind that the lowest fuel price doesn’t always equate to the best deal, Bob advises.

“If a station offers the best fuel price, but they don’t have showers or food or anything like that, you’ll need to factor that in your calculations,” Bob explains. “I’ve seen differences as little as one tenth of a cent between one fuel stop and another. So, you have to consider: Do I pay a tenth of a cent less and buy a shower, or do I spend the extra half cent, or whatever it is, and get a free shower? You have to take that into consideration when you are buying your fuel. If you’re only going to save $4.00 on fuel, but then you have to go on down the road and spend $13.00 on a shower, you didn’t save anything.”

Best Practice #2. Compare the actual price of fuel by subtracting the state’s fuel tax.
Each state charges its own fuel tax, which is collected at the pump in that state. Then a portion of that money is paid to the state based on the number of gallons your truck consumes while traveling through that state. Any remaining state tax money collected can be applied as a tax credit that will pay the fuel taxes in the surrounding states that you drive through.

So, what does all this have to do with your fuel cost management strategy?

Linda says that if you’re looking to pay the lowest fuel price, you need to subtract the state tax from the price at the pump so that you know how much you’re actually paying for fuel.

She uses the state fuel tax difference (as of press time) between Florida and Georgia as an example. “In Florida, on every gallon of fuel we purchase, there is .3387 on a gallon of fuel. If you cross the line into Georgia, it’s .294. That’s a four cent difference in terms of the tax. So, if the price at the pump is the same in Georgia and Florida, and you take out the state fuel taxes, we’d be better off to fuel in Florida than we would in Georgia because the actual price of fuel is four cents lower in Florida.”

Best Practice #3. Practice fuel-saving driving behaviors
Earlier this year, the Caffees installed a gadget on their truck called the PedalCoach by LinkeDrive as part of a pilot program that gives them real-time feedback on how they’re driving the vehicle in terms of maximizing fuel efficiency.

Says Linda, “The system will tell you, for example, that when you pull forward, do you give the throttle too much? When you’re pulling up onto the interstate, are you standing on the throttle and not letting the truck to just build into what you need to be on? Not saying that you need to creep out there, but are you doing too much? It has changed both of us on our driving habits in really fine-tuning more of what we are doing.”

What has been the impact on their truck’s fuel economy since using the PedalCoach system?

The Bottom Line
As Hurricanes Harvey and Irma have demonstrated, fuel prices are anything but stable, driven by events that are completely outside anyone’s control. So, put these three best practices to work for you–no matter what fuel prices might be at any given time–to cut fuel costs and get the most out of every drop of fuel your truck consumes.