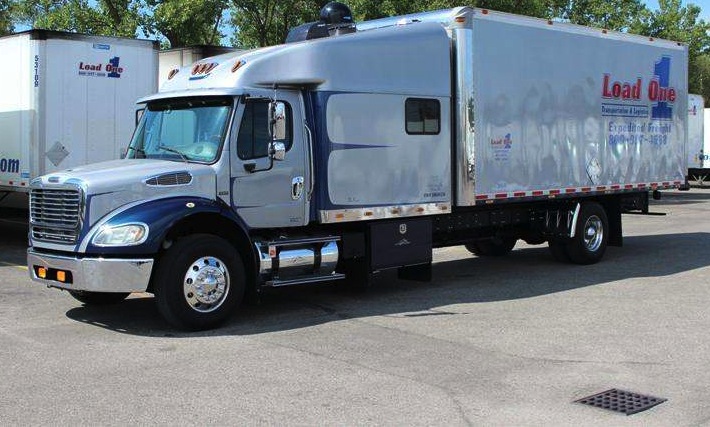 Tom and Tina were not intending on entering their truck in the truck show much less winning an award. Tom says, “We are leased to Load One Transportation & Logistics. We have had the truck out front twice before. John Elliot, of Load One asked us to be representatives and put the truck in the booth at this show. We knew that there was a Drivers’ Choice award but had always thought it was just for the dealer’s new trucks till they gave us our entry number, so we put it in the window and that was all we thought of it.”

“We had taken a quick break in preparation of tearing down the booth and getting to the BBQ. Upon returning, we were told we were needed at the broadcasting area for the awards. We felt shock followed by disbelief when we found that we had won the Drivers’ Choice Award. We were very proud to accept the award especially with a seven-year-old truck with 750,000 miles on it.” Tom continued,”While we do put forth a lot of effort to keep it clean, it is not a show truck.”

The blue and silver Freightliner M2/112, with a dry van box, originally purchased new by Tom and Tina, has a 12.8-liter Mercedes engine; the transmission is an HS 4000 series 6-speed Allison automatic.”We had the truck built to our specs by Wes Hearn and Heath Wood of Middle Georgia Freightliner in Macon, Georgia. They are also responsible for the paint on the truck. The dealership paid for the two-tone upgrade when they realized we were serious about building a non-white truck. In turn, they used the truck in some advertising for the dealership. We already had a good relationship with them as we bought our first truck from them when we started expediting in 2000,” Tom said.”Jason Skidmore at Lakeshore Utility Graphics, Brownstown Michigan, designed and applied the beautiful graphics for the truck.”

Tina designed the layout for the standard 96″ sleeper built by AA Sleeper in Ft. Worth, Texas. The sleeper has all the standard AA amenities. Big refrigerator/freezer, sink and running water, full size bed, microwave, large flat screen TV with a Winegard in-motion satellite system, radiant heat floor and roof vent. Tina laid out the cabinets to include double his/hers closets and four pull out drawers. A standard chair AA puts in was taken out to accommodate these additions. Tina had the bed raised six inches to accommodate the addition of a toilet in the front of the bunk where it is hidden and easily accessible. The truck is a single bunk truck so there are cabinets for storage around the upper part of the sleeper. The interior of the sleeper is blue and silver to match the exterior.

Tom and Tina have been married for sixteen years and expediting together for twelve. They have three children; twins Angel and Chas are 29 and Jacob who is 23. Brooklyn, their first grandchild was born in December 2011. The other family members include Doc, a 9-year-old beagle and Daisy, a 5-year-old dachshund/beagle mix. Both were rescues, Doc from the pound and Daisy from the parking lot of the Laredo, Texas Flying J when she was 5 weeks old.

Family is important to Tom and Tina both on personal and business levels.”We are fortunate to have help from our children to keep things running smooth with the business and the house while we are away. Anything needed is just a phone call away and our daughter is there at the house to take care of any issues that should arise. Our son Jacob is responsible for the way the outside of the truck is maintained. Without him, keeping the finish up on the truck would be much more difficult. When we are home, he runs his hands over the truck, tells me what needs attention, and then takes care of it. He really worked hard helping get the truck ready for the Expo; we share and credit the award to him. We think he secretly was quite taken by the win also,” Tom laughs.

“Tina and I were proud to win the award with the truck representing Load One and the entire Load One family took pride right along with us. Tina and I would also like to give a special thanks to the Load One staff that was at the show; John Elliott, Vince Santana, Brian Welsh, Mike Johnson Sr., and Mike Johnson Jr. for their support and the opportunity. Thanks also goes out to our friends/owner operators Jason and Kim Smiley, Steve and Shirley Wolfe, Nick and Jenny Marcu and Dennis Wilhelm, who gave their time to be at the show and helped us with whatever was needed. We did not win this award alone,” Tom said.

“We will not compete in truck beauty competitions. We might show the truck occasionally at a small venue or local show and we would be honored to put it back at the Expedite Expo in the booth if we are asked by our carrier, or out in front as we have in the past,” Tom said.

Winning an award for a beautifully maintained truck gives the truck owner an extra boost and tangible proof of their hard work. The owners hold that pride in their heart. The visible proof, the award itself, sits on the mantle at home to be admired when they are at home for Tom and Tina Evans; especially son Jacob with his secret grin admires it. He knows he has done a good job in helping win the award.